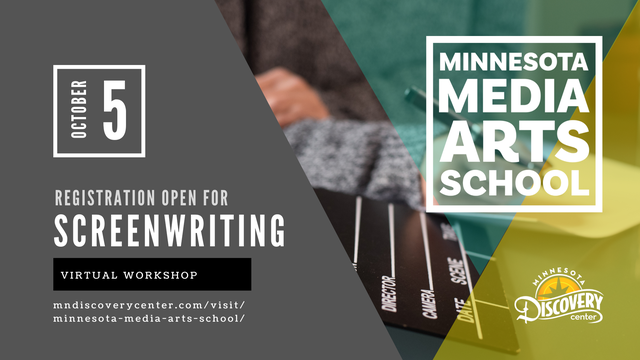 The Minnesota Discovery Center's Minnesota Media Arts School, in partnership with the Zeitgeist, is an affordable option for the Northland’s diverse creative community ranging from filmmakers, graphic designers, multimedia artists, and theatrical artists to learn, work, create, and connect. With teaching hubs in Chisholm and Duluth, we will add important contributions to the regional film ecosystem.

Do you have a great idea for a feature film? Many have great ideas; only few craft them into screenplays. In this workshop, learn screenwriting fundamentals as you develop your idea from pitch to outline to screenplay. While no previous screenwriting experience is required, you should come to the workshop with ideas for short films.

Matthew Dressel is a screenwriter and freelance editor currently living in Duluth, Minnesota.  His first feature length screenplay (tentatively titled Killing Daniel) has been completed and is set to be released in 2022.  The film features Joel David Moore, Bob Saget, and Iggy Pop. Matthew has written, directed, and edited several short films that have gone on to receive exhibition deals and awards.  Return to Menu, a short comedy of errors, was featured in the textbook Viewpoints. Before moving to Duluth, Matthew worked as an assistant editor and copywriter in Los Angeles, creating content for Walt Disney Studios, 20th Century Fox, Lionsgate, and many more.