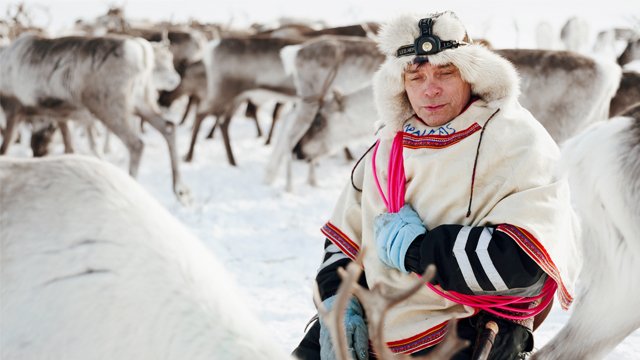 This exhibit tells the amazing story of the importation of Sámi reindeer herders from Norway to Alaska, and of the lasting effects to both the Sámi and indigenous tribes of Alaska. The story is told using rare images of Sámi life in Alaska, traditional clothing, reindeer herding tools, and Sámi objects including a lavvu tent.

Also on display will be photographer Erika Larsen’s immersive 2007-2011 pictorial journey, Walking With Reindeer, that tells of her time spent with the few Sámi in Norway and Sweden who still herd reindeer.

Our partner for this exhibit: Sámi Cultural Center of North America

The Sámi Cultural Center of North America, a 501(c)(3) non-profit organization, has as its mission to sponsor activities which foster an awareness of the Sámi culture through education, communication, research, and the arts; facilitate connections between the descendants of Sámi immigrants to North America and their relatives in the Nordic countries; and encourage mutually supportive relationships with other Indigenous and environmental organizations. The Sámi Cultural Center is currently working to establish an on-line Virtual Center and work on publications and exhibits.

Indigenous to the Arctic Circle of northern Scandinavia and Russia—the largest area in the world with an ancestral way of life based on the seasonal migrations of the animals—the Sámi are by tradition reindeer herders who have lived as nomads. By possessing a livelihood dependent on their surroundings, the herders are acutely aware of changes in nature and have survived in extreme climatic circumstances for ages. Their spoken language, part of the Uralic language group, has transformed and is considered an Arctic language rich in its ability to explain the natural world.

I came here to understand the primal drive of the modern hunter and to find a people who, when the land spoke, could interpret its language.

I also came in search of silence so that I could begin to hear again.

From the first images I created in this land I could see the people lived in two worlds. Through them I experienced a past rich in its connection to nature, driven by the need to survive and enveloped in a relationship with the earth and its surroundings. The images exposed the presence of a people still nomadic, with traditional roots intact, living in tandem with the arctic landscape. I have observed nature being at once both beautiful and brutal and it appears that the herding culture is still living in a rhythmic flow with nature. Through the Sámi I hope to better understand our role as stewards of the earth. It is inevitable when spending time in a more nature-based culture that one must recognize the cycles of life and death and therefore begin to evaluate man’s role within this circle.

My photographs concentrate on a small percentage of Sámi that are still reindeer herding. They explore their symbiotic relationship with the environment, their existence in today’s world and the mystery and beauty that fueled past generations to survive.

This story was created between 2007 and 2011. It is a personal journey and exploration where I immersed in the daily life of a few families involved in reindeer herding. My story by no means represents all Sámi herders or Sámi culture as a whole. I was fortunate enough to learn from the people that I met but am by no means a voice for the Sámi people. They have their own voice and their own stories to tell.

Most of the images were taken in or near Kautokeino, Norway and Gällivare, Sweden. For most of that time I worked as a beaga, or housekeeper, for Nils Peder and Ingrid Gaup. I chose to immerse myself in this manner so that I could better understand what I was seeing and experiencing. The actual image-making process was intuitive, but understanding the culture took daily effort through work, learning their language and listening.